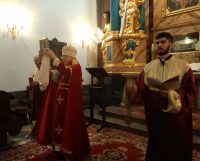 On the 9th of February 19, 2019 there was 100th anniversary of delivering by the Archbishop Jozef T. Teodorowicz memorable so called Sejm Sermon (Parliamentary Sermon).In order to commemorate this event in the Warsaw Cathedral a plaque was unveiled , which was then consecrated by the priest Kazimierz Cardinal Nycz, Ordinary of believers to the Armenian Catholic rite.
On the 16th of February 19, 2020 in the Warsaw Cathedral we observed the first anniversary of unveiling and blessing of this plaque. The Armenian Catholic Holy Mass in the Literary Chapel of this temple was celebrated by the priest Professor Jozef Naumowicz. In the delivered sermon he recalled the merits of the Archbishop Jozef T.Teodorowicz in fighting for regaining the Poland’s independence. He solicited this matter in the Parliament in Vienna, in Vatican and in Europe, wherever he could do that. He supported Polish interests in Silesia and Poznan. He was an Armenian but also a great Polish patriot. He was a remarkable orator, distinguished theologian and splendid preacher . As a member of Parliament from Podlasie Region he was offered to deliver a sermon at the Holy Mass on 9th of February 1919 one day before the first session of the legislative Sejm (Parliament).The Priest also mentioned the echoes of his sermon. The then press described Archbishop Joseph T. Teodorowicz as undoubtedly the first Polish preacher. The Priest J.Naumowicz reminded of the fate of the remains of the Archbishop buried in accordance with his will among the heroes of the fights of 1920 at the Cemetery of Lviv Orleta.
At the beginning of the Second World War the archbishop’s ashes were hidden in the Lyczakovski Cemetery for fear of being desecrated. There were needed very difficult and lasting for many years diplomatic efforts to transfer finally in 2011 bishop’s ashes to original place of burial. Priest Jozef Naumowicz expressed his sincere thanks to all those who were engaged in this difficult undertaking. He put forward the proposal that next year in June 2021, on the tenth anniversary of the Archbishop’s Jozef T. Teodorowicz re-burial a pilgrimage to Lviv in order to celebrate this anniversary to be arranged.
In the final part of the Holy Mass its participants went under the plaque where they said the prayer “Our Father in Heaven”- Armenian “Hajr Mer” and sung the song “Boze, cos Polske”(“God whose Poland”). Priest Jozef Naumowicz gave everyone final blessing. This Holy Mass attended by many faithful and not Catholic Armenians only will certainly remain in our memory for a long time.