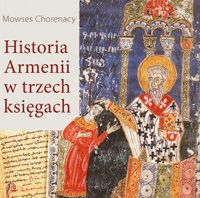 The “History of Armenia in three books” by Mozes Chorenacy – the next volume, already the fourth in the series “Lehahayer” Library, was published by the Krakow Center for Research on Armenian Culture in Poland.
It is a translation of an important source in the history of Armenia.
The translation was made by Dr. Stanislaw Ulaszek (University of Gdańsk) from the History of Armenia edition by prof. Gagik Sarkisjan (in Russian).
Additional footnotes, comments, introduction and indexes were provided by Professor Andrzej Pisowicz (Jagiellonian University). The cover of the issue was designed by Monika Zolotenka. The publication of the volume was facilitated by a generous donation from Mr. Zbigniew Manugiewicz, a member of the Council of KCRACP. Like the previous volumes, this one was also published by Ksiegarnia Akademicka in Krakow, where it is also available for purchase.

Mowses Chorenacy also called Mozes from Choren is a historian of ancient Armenia. As for his biography, disputes persist in science. Some arbitrarily believe that he lived at the turn of the 8th and 9th centuries.
He himself claimed to be a student of two outstanding personalities of the Armenian Church, active at the turn of the 4th and 5th centuries; Swietego Mesrob, known as Masztoc, author of the Armenian alphabet, and Swietego Sahak, known as the Great. Saint Sahak was a Catholicos, a descendant of Saint Gregory who converted Armenia to Christianity and hence he was called the Illuminator. After the Council of Ephesus (431) they were to send him on a journey through the most important centers of Christianity in Jerusalem, Alexandria, Constantinople and Rome. After his return, Moses dealt with the translation of various works into the Armenian language, and in his old age he wrote the history of Armenia from the most ancient, legendary times until the first half of the 5th century. He based his argumentations on Armenian sources, various Christian writings, the archives of Nineveh and the works of ancient writers. He wrote on the glory of the Bagratuni dynasty, but above all he glorified his homeland, Armenia.
He linked its history with the history of the people of Israel and the most distant fate of Eastern civilization.

As we read in the introduction, the publication is intended for all Poles interested in Armenia, its centuries-old history, old Christian tradition and literature dating back to antiquity.