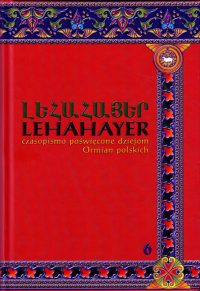 The sixth issue of the magazine devoted to the history of Polish Armenians has just been published – “LEHAHAYER”. As usual, its content is very interesting. Monika Agopsowicz undertakes attempts to reconstruct the list of names of Kamieniec Armenians in the 17th century. Dorota Jarzabek-Wasyl writes about enterprising Warsaw Armenians of whom Szymonowicz most probably became the archetype of character from Bohomolec comedy. Maksym Potapenko describes Armenians from Mohylow Podolski, while Father Marek Milawicki quotes sources of Armenian Catholic Church history from Vienna collections. You may also find there a very interesting lecture by Wahan Ohanian, mekhitarist from Venice on Gewondian Alishan , the 19th century poet and historian from Armenia, who was as well a monk and intellectual. Tomasz Krzyzhowski talks over the correspondence between the Archbishop Joseph Teodorowicz and the Primate Cardinal Augustyn Hlond. Romana Obrocka elaborates the Letters from Lagr (Concentration Camp) by Isaaak Antoni Donigiewicz.
In the part of the magazine called “Voices, Reviews, Information” one may find among others; Krzysztof Stopka returns to the fate of the Gospel from Skewra. Andrzej Pisowicz takes out origin of the name Penderecki. Andrzej Zieba writes about the discovery from Jass which might turn out to be the picture by T.Axentowicz “Baptism of Armenia” ordered originally by the Priest Bogdanowicz for the Church in Suczawa. Andrzej Zieba is also the author of the report about inauguration of activities of the Research Center on Armenian Culture in Poland.